My 500 coupe's main purpose has been a testbed for high-performance Corvair engines and other modifications. This car is quite different from all of the other Corvairs I have owned over the years, which tend to exemplify stock configuration and appearance. All of the modifications are intended to answer the question, "What could the Corvair have been like if development had continued for a third generation?" This multi-decade project has explored a variety of mechanical and electrical improvements but has not ventured into evolving the styling (although there are a number of artists' conceptual sketches that could be pursued).

Although I have the vision for what this car has become, I could not have achieved it without the help of many talented people along the way, including: John Barnes, Jim Brossard, Duane Cartwright, Stan East, Seth Emerson, Ken Hand, Greg King, Duanne Luckow, Kevin Nash, Craig Nicol, Dean Richardson, Linn Richardson, Ray Sedman, Dale Stephens, and Kyle Sullivan, not to mention the many automotive professionals who have provided valuable parts and services. (I hope I haven't missed anyone--if so, I sincerely apologize.)

This 500 started out life painted Sandalwood Tan with a fawn interior and bench seats and was powered by a 110 HP engine with PowerGlide automatic transmission. Because this combination was not highly-desired among collectors, plus the fact that it was a rust-free southern California car, it was an ideal choice for a durable testbed that wouldn't attract too much attention while conducting occasional spirited test drives on the street. Here are some photos of its budget restoration and color change in early 1995: 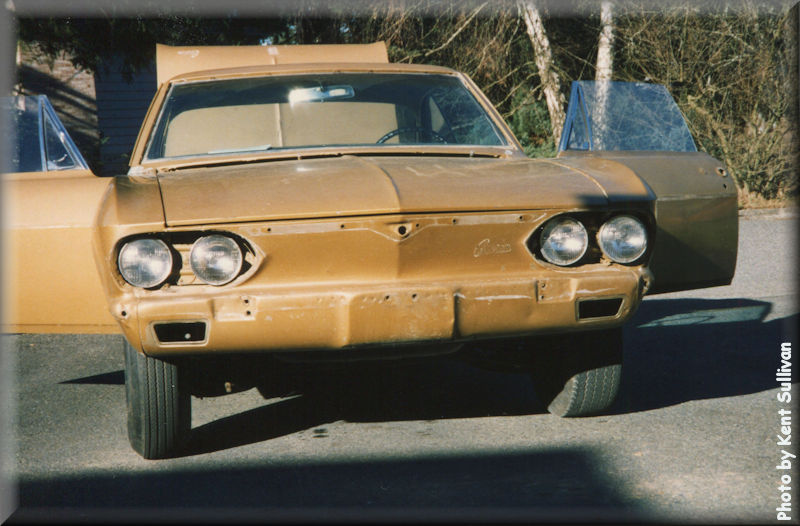 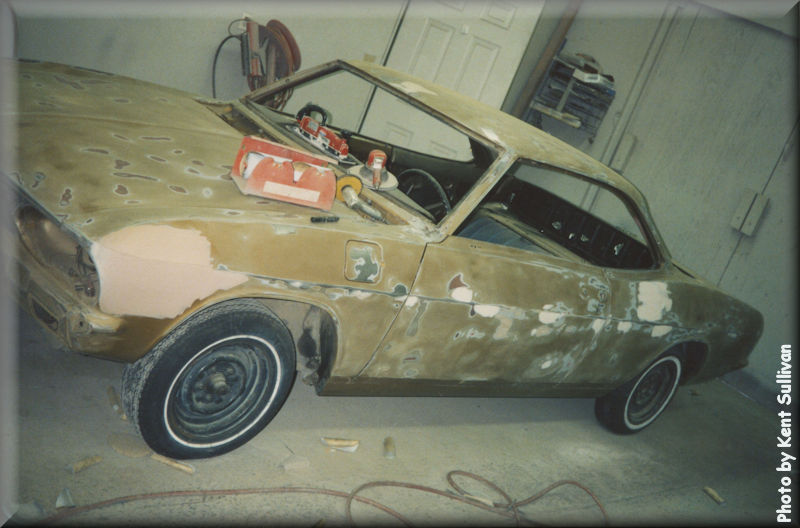 One modification to the interior sheet metal was changing the sides of the radio opening to accept a standard DIN cage: 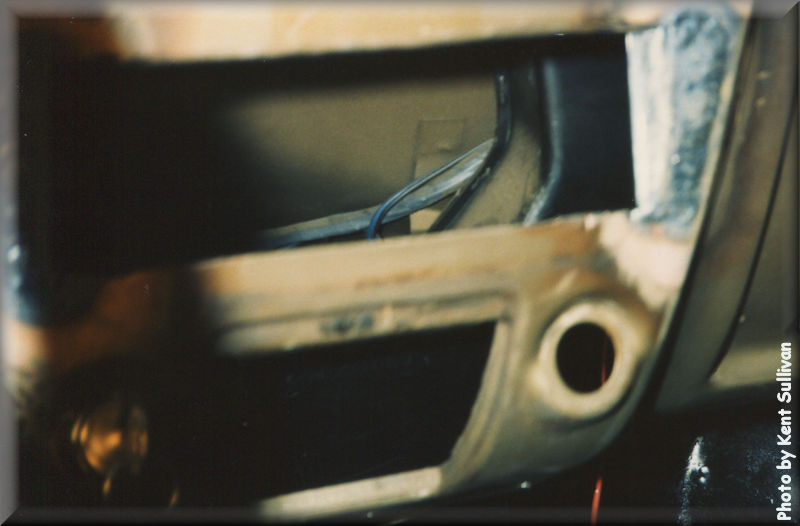 This is the engine that powered the car before the installation of the big-bore mill: 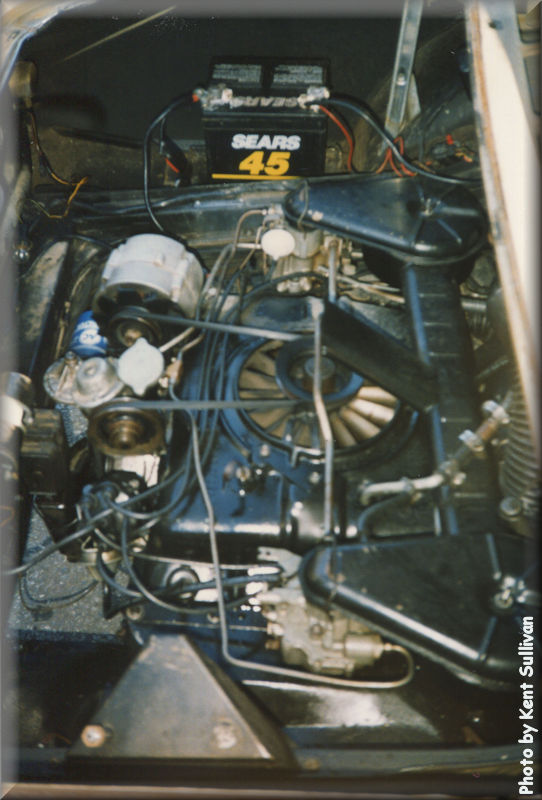 Here's a picture from July 1996 showing the exterior changes--quite a different look and feel: 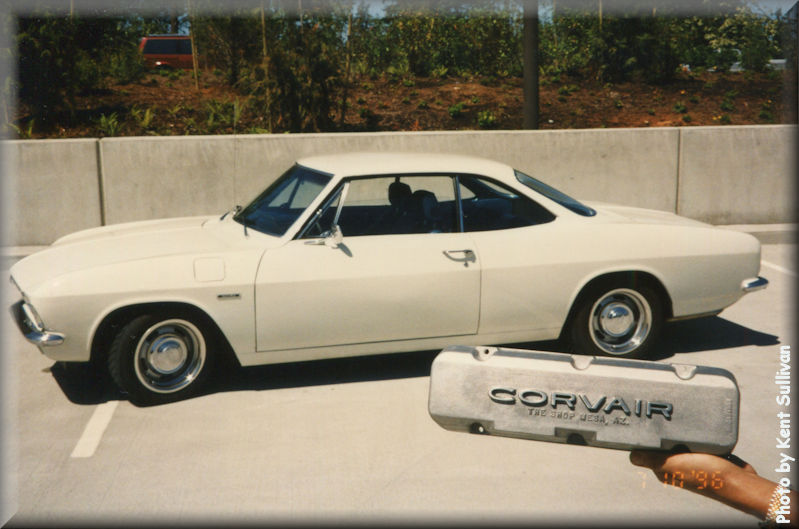 The following sections describe the many modifications I have made over the years. Enjoy!

As described in the separate big-bore engine feature, the powerplant is highly modified. As of Summer 2020, it features a Nash cooling fan and airflow pulley. 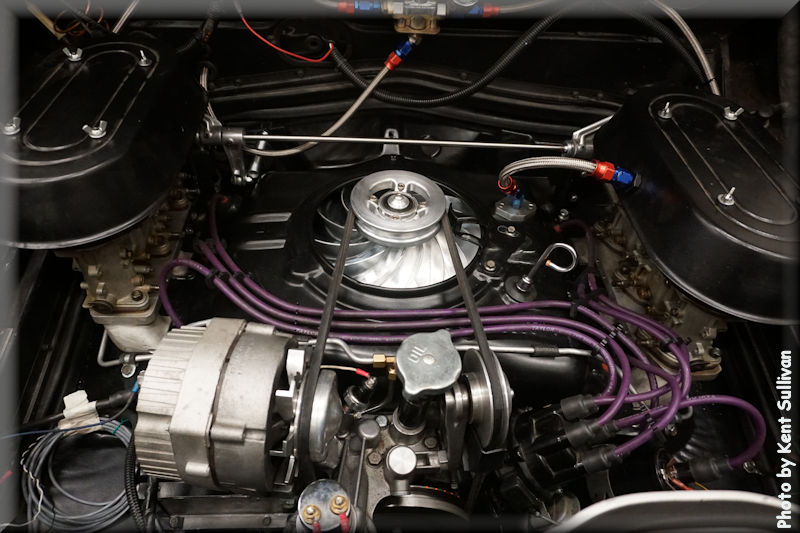 I am not a big fan of headers on a Corvair, mainly due to the complexities of retaining forced-air heat for the passenger compartment, so I was thrilled to learn about the large-diameter tubular exhaust manifolds available from Dave Kostich. (Dave supplies the manifolds with a triangular, three-bolt flange. I modified the manifolds to use a V-band clamp flange.) I intentionally did not use dual mufflers because I wanted the exhaust note of a single muffler. The crossover pipe is a custom, larger-diameter affair and the muffler is free-flowing without producing a "drone" at cruising speed. 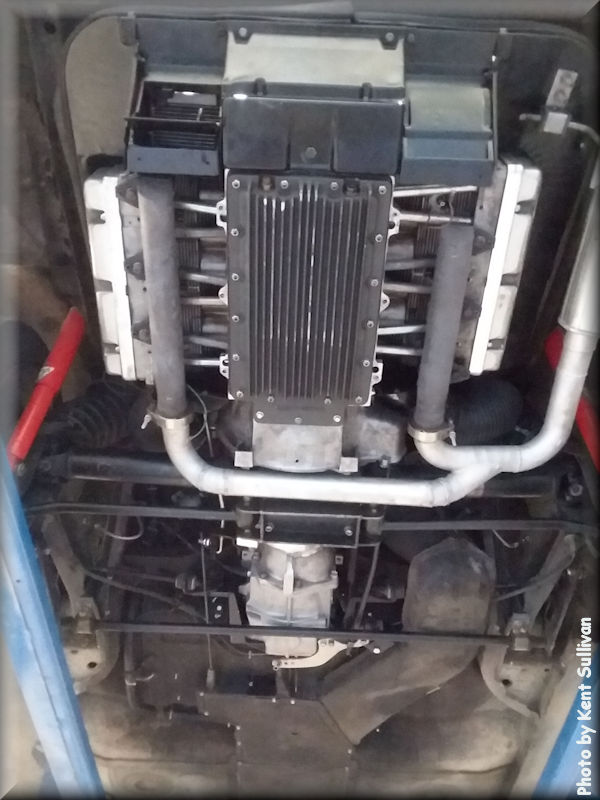 To help protect the dollars invested in the engine, spark is controlled by a Safeguard ignition system, which has a knock sensor mounted conveniently in the engine top shroud. To further protect the engine, it is well-instrumented, with sensors for oil pressure (mounted on  an "Adapt-a-Bolt" as sold by Clark's Corvair Parts and other vendors), oil temperature (mounted in an oil galley in the front cover), and oxygen (mounted in the exhaust crossover pipe and connected to an Innovate Motorsports LC2 controller, which is mounted on the driver's side rear seat floor). The gauges for all of this instrumentation are mounted in a pod underneath the ashtray.

Because the lifters and pushrods for the hydraulic roller camshaft don't rotate, the engine has a separate "spray bar" oiling system in the valve covers. The system is fed from a take-off at the oil pressure snap switch and connects to a fitting at the top front of each valve cover.

The Weber carburetors require precise fuel management so I decided to modernize the fuel delivery system, beginning with an in-tank electric fuel pump. Because an electric pump could continue to run after an accident, I installed a manual power switch beneath the glovebox, along with an inertia cutoff switch on the floorboard up under the dash. Weber carburetors need only about 1/2 the fuel pressure of a stock Corvair, so I installed a fuel pressure regulator and gauge in the engine compartment.

This car has one of 18 Borg-Warner T5 5-speed transmission conversions created by the now-defunct American Boxer R&D LLC: 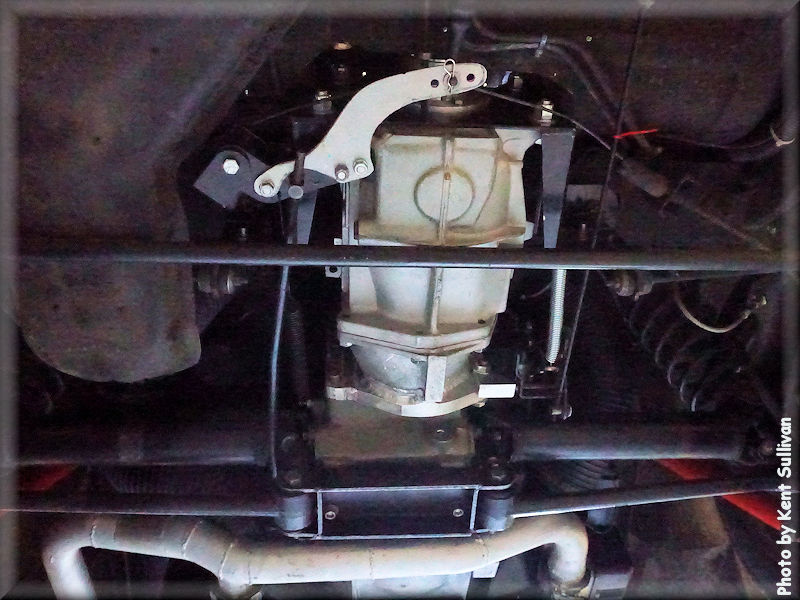 You can read all about the 5-speed project on Corvair Center. It was a little bit of a challenge tracking down a shift knob that has the same general appearance as the Corvair knob but with 5 forward gears indicated. The transmission gets power to the wheels via a 3.55:1 limited-slip (Positraction) differential with the 4-spider-gear upgrade.

Knowing what I know now, it might have been easier to track down a rare '67 500 coupe rather than updating a '66 with important '67 safety improvements. One of the '67 items I transplanted is the dual-circuit brake master cylinder. Another is the collapsible steering column, which was no easy task to transplant, since underdash welding was involved. (Perhaps some day I'll write up that conversion in more detail.) Along with the collapsible column, I managed to track down a nearly-unobtainable '67 factory quick-ratio steering box and arms. (The steering arms are the same for all late-model Corvairs.)

The suspension features Koni adjustable shock absorbers (as sold by Clark's Corvair Parts), custom coil springs that duplicate the stock Corvair heavy duty spring specs but are one coil shorter (from Coil Spring Specialties), and tubular anti-sway bars from The Shop (Bob Coffin). Here's a look at the front bar and mount and the rear bar and mount. The brakes, suspension, and steering drive custom 15" steel wheels from Wheel Vintiques wearing Kumho Ecsta 711 205/50-15 tires on 7" rims in the front and 225/50-15 tires on 8" rims in the rear. The spare tire is a self-inflating mini-spare (from an '87 Pontiac Firebird TransAm) mounted on the trunk floor. I also relocated the jack and handle to behind the left headlight bucket, using a fixture originally designed for a Corvair with air conditioning.

The overall effect is a Corvair that looks like it means business without being over the top. The wider tires fit comfortably in the wheelwells while the tire size difference plus the spring package provides a gentle rake: 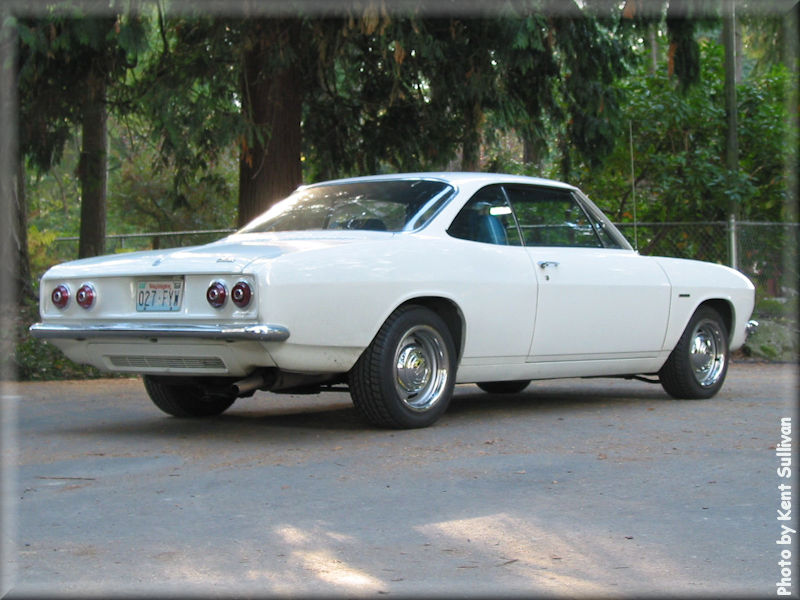 Over the course of several years, I separately lucked into pairs of Cibie halogen low-beam and high-beam headlights. I understand they are quite difficult to replace if broken, so I installed a set of headlight guards, which are quickly becoming a vintage accessory. (Cal Clark, Sr. used to make them.) Jim Brossard of Corvairs Northwest helped install additional wiring and relays to safely provide the increased amperage required by the Cibie high-beam lights. Also in the lighting department, I located an under-hood light for the trunk lid and under-deck light for the engine lid, both of which are from later Chevrolets but fit fine. Although technically not lighting-related, I installed an engine lid lock next to the license plate light (as sold by Clark's Corvair Parts).

Perhaps the first thing one notices when opening the driver's door is a steering wheel that looks stock... Sort of. It's actually a mild custom steering wheel from Performance Corvairs (Seth Emerson) that is very similar to the '67 Corvair and Camaro "sport" wheel, which was possible to use due to the transplanted '67 collapsible steering column discused above. With a 15" diameter and 2" of dish, it is 1" smaller in diameter than stock, with 1/2 the amount of dish. It is also leather-wrapped rather than simulated wood. Seth helped me track down a factory-type hub for the wheel, which was painted to match the steering column. Speaking of the steering column, the '67 collapsible column features a true-momentary turn signal lever with integrated hazard flasher switch. I converted the column to use the more-durable Delco turn signal switch rather than the fragile all-plastic Boyne switch. (You can read more about this conversion: 1967-9 Turn Signal "Switch-a-roo".)

Looking through the steering wheel, you will see an instrument cluster from a '66 Corsa, with modifications (of course). A second cylinder-head temp gauge takes the place of the clock, so that temp from one cylinder from each head is reported. (By the way, the temp for each head is reported using a thermocouple from VairTRIX, as sold by Clark's Corvair Parts, which is more accurate than the stock thermistor.) The dash wiring harness is custom and reflects what a '67 Corsa harness would have included, including the wiring for the parking brake warning light switch, which controls the parking brake warning light mounted at the bottom of the dash. I transplanted the clutch pedal / brake pedal / parking brake assembly from a '69 manual-transmission Corvair to provide a parking brake mechanism with the afore-mentioned switch. This assembly also provided the one-year-only clutch pedal that uses a cable with a Heim joint at the pedal end, which is a more-durable clutch cable design.

The windshield stays fog-free, and passengers stay toasty in the winter, thanks to a high-volume heater motor (as sold by Clark's Corvair Parts), which I wired appropriately by using a relay mounted in the engine compartment. This mod allow the motor to safely draw all the power it needs when the fan is in the High position.

Given the performance characteristics of this car, it didn't make sense to continue to rely on just lap belts for the front seats. I researched alternatives and chose to adapt the front seats from a Chrysler Sebring convertible, which have integrated shoulder harnesses. The driver's seat is powered and both seats have solenoids that operate a quick-lock mechanism in case of a rollover accident. (The seat adaptation is discussed in detail here: Chrysler Sebring convertible seats.) The rear seats are custom, based on aftermarket Jeep front seats from Smittybilt. The rear lap belts feature deluxe '66 Corvair buckles, with webbing that matches the front seat belts.

Between the front seats is a small center console, transplanted from a '62 Chevy Impala SS, with a courtesy light that is connected to the dome light circuit. I re-keyed the lock on the center console to match the trunk and glovebox door lock. Speaking of the glovebox door, I transplanted one from a '66 Corsa. Just above it is a "grab bar" from a first-generation Camaro. The front door panels are Corsa-style, with the emblems removed. All four seats use the same blue vinyl as the door panels and the center console is painted to match. The center of each seat is a dark blue knitted material that is more comfortable that vinyl, especially in hot weather.

The Sony MEX-series in-dash media player is pretty tame by today's standards, featuring a single-disc CD player and BlueTooth streaming capabilities. I mounted a pair of Boston Acoustics midrange / bass speakers in the front doors (with optional spacers so that they don't bottom-out). The wiring is protected in the door jambs with factory-style accordion boots. A matching pair of Boston Acoustic tweeters is mounted at the top of the A-pillar trim, with the wiring tucked behind. An Aura bass shaker provides tasteful bottom end and is mounted between the rear seats, concealed by the tunnel that encloses the transmission linkage. Powering the stereo is an Alpine amplifier hidden under the front passenger seat. A pair of Boston Acoustic crossovers are mounted up under the dash behind the glovebox. As part of the audio installation, I installed sound deadening material throughout the passenger cabin.

One last interior item to note is an auxiliary power outlet, which I mounted next to the auxiliary gauge pod.

I love driving this car due to the combination of smooth power, great handling, and comfortable/secure seats. Here's a picture of it after a spirited Spring drive: 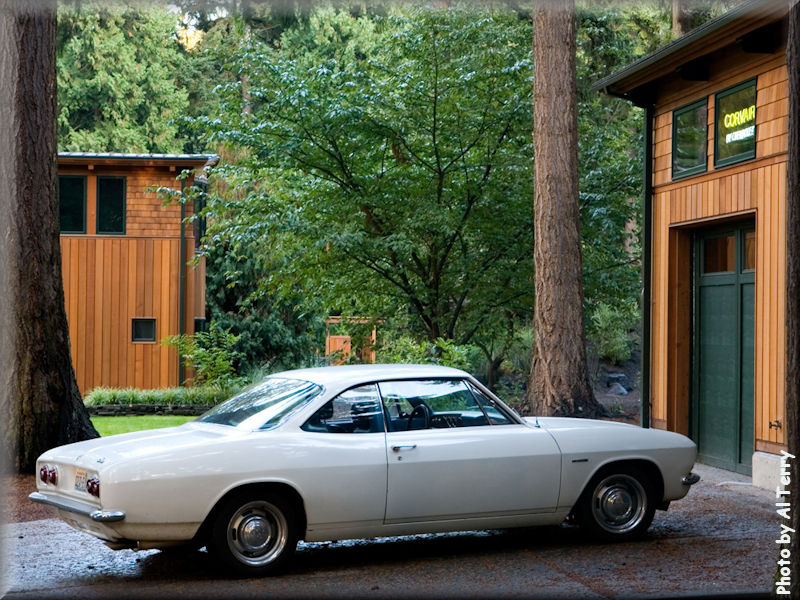 However, given that the car is truly a testbed, a more-representative photo is probably of it on the dyno, where we regularly gather data so that we can continue to improve its performance: 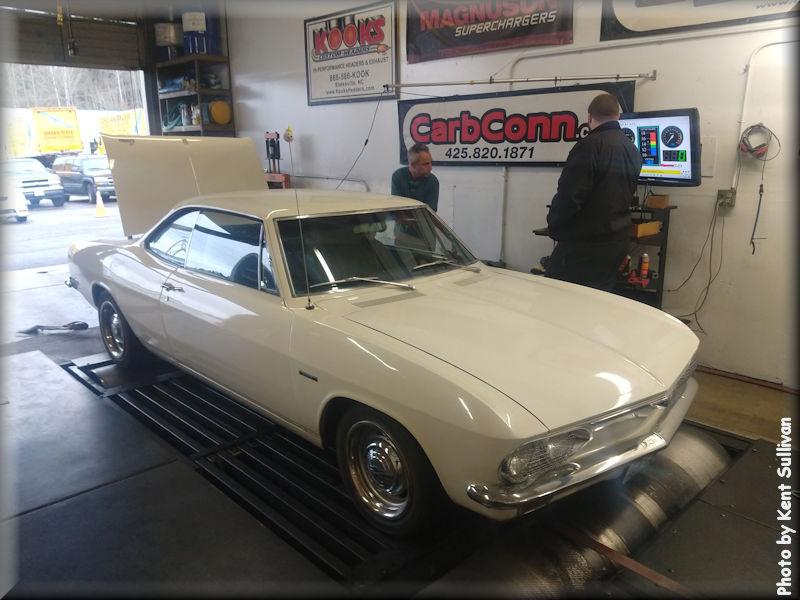 My '66 500 coupe is definitely not a beauty queen but I do enjoy taking it to cruise-ins and talking about its many modifications: 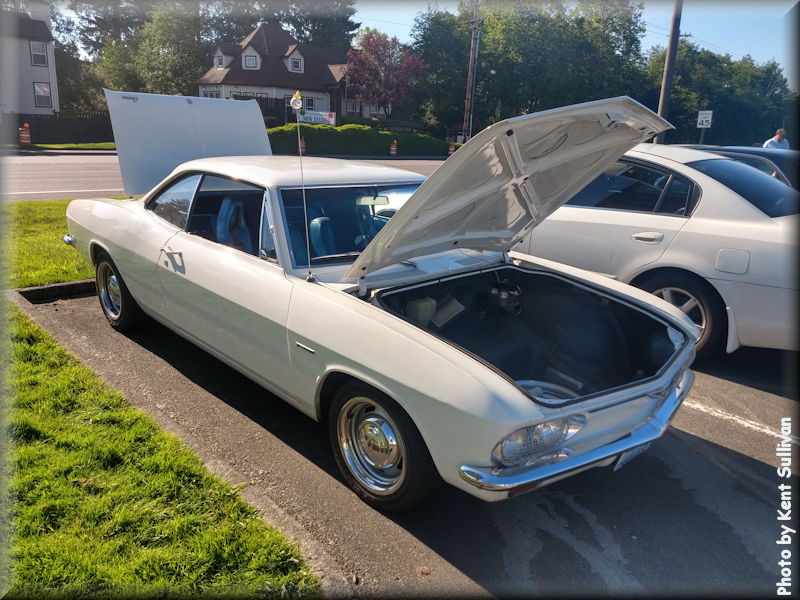 Maybe I'll see you at an event in the Pacific Northwest one day soon!