As a bona fide Corvair nut since 1983, I have always wanted a strong-performing street car. My first Corvair was a '62 Monza coupe with an 80 HP engine—not exactly a high-performance machine. As I learned about Corvair engines, I realized that the power of the stock engine could be improved in several ways, but that many of the "improvements" (radical cam, higher compression ratio, etc.) seriously degraded streetability and that others (turbo-charging, center-mount 4-barrel carb, etc.) were expensive to maintain and had some reliability problems.

I checked out V8-powered Corvairs and admired their incredible performance, but was not happy with the necessary trade-offs (loss of interior room with most of the conversions, problems with transaxle strength, etc.). And, more importantly, I thought it was much more of a challenge to improve the stock Corvair engine's performance, and that doing so retained the essence of what it means to drive a Corvair. (There's nothing like the exhaust note of a horizontally-opposed Corvair engine!)

Given these factors, I began exploring other avenues. As many performance enthusiasts have said, "There's no substitute for cubic inches". I learned that a .060" overbored stock cylinder was fairly common. I also learned that .125" overbore kits were available but that the resulting cylinder walls were very thin. I eventually learned about the famous Salih Engineering and Stokes Engineering custom piston and barrel sets, which, at their largest, had a .3125" overbore. That was what I was after!

Trying to find a set of Salih or Stokes barrels was no easy feat—I missed out on a couple of them. They weren't cheap either—at least $1000 for a set of six. Feeling like I was headed down a dead-end street, I talked with my friend Linn Richardson. As luck would have it, he had recently heard about large-displacement piston and barrel sets for air-cooled VW 4-cylinder engines, manufactured by Mahle (a.k.a. Cima).

To make a long story short, Linn ordered a set of the 94 mm pistons and barrels in the summer of 1994, and after some experimentation with master machinist John Barnes of Seattle, determined that building a big-bore Corvair engine based on these components was very feasible. I quickly signed myself up to be the "guinea pig" for the first of these engines Linn and John were to build.

Below is a table, sorted by increasing displacement, that compares various Corvair engine cylinder sizes and the resulting displacements. All of these configurations retain the stock stroke of 2 15/16" (2.9375").

In computing the figures in the table above, I relied on several useful formulas.

Graham Dell's 3-liter Ultravan engine was also built by Linn and John and powers Ultravan #292, which Graham is restoring extensively. Graham is going all-out—his engine is fuel injected using custom fuel rails and Haltech's E6A controller (which has been superceded by later models). (Check Haltech's home page for info on their products.)

Below are some "visual aids" to help conceptualize the size difference between stock Corvair late model components and the 3.1 liter (94 mm) package.

Since my engine was the first 94 mm job that Linn and John attempted, we decided to be fairly conservative. We made reliability the #1 priority so that we could assess the longevity of the Cima/Mahle components. Exotic fuel intake systems, turbocharging, etc. could come later.

The engine started from literally nothing—Linn selected the best bare case he had on hand and the engine was built from the ground up. Every part was thoroughly inspected, cleaned, painted (if necessary), balanced (if necessary), etc. We didn't use a NOS crank or heads, just used ones with no structural damage. (The heads were painstaking deflashed.)

I didn't take a lot of pictures of the particular engine assembly details but the Mighty Mouse feature captures a process very similar to the one that John and Linn used. (Check out the annotations to see the major differences in our process.)

Below is a laundry list of some of the noteworthy engine components:

Also, check out details about some of the features of the car in which this engine was installed (1995-98).

Note: This engine is now in Dean Richardson's 5-speed Corvair. Dean has made a few changes; notably, a quieter exhaust.

We spent three days in August, 1998 testing the Stage 1 engine at Austin's Pro/Max Performance Center in Puyallup, WA. (They have since moved to nearby Tacoma.) Their engine dyno is an inertia type, meaning that the engine is connected (through a reduction drive) to a spinning mass. The dyno is designed for wide-open throttle "pulls" only, not for tuning an engine by holding it at a given RPM.

Obviously, this required removing the engine from the car. Austin's Pro/Max also has a chassis dyno, which is good for tuning the engine in the car (and for estimating horsepower delivered to the drive wheels).

I made the graph below using data from our best dyno run and data published in Chevrolet's "1965 Corvair 164 Cu. In. HO-6 Stock Engine Test" (available as a reprint from Clark's. Order part C7958.)

Click on the image below to see the full-sized graph: 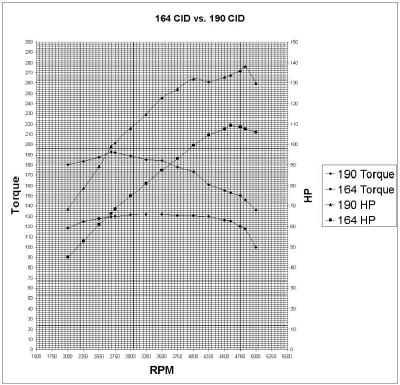 Both sets of results were from "as installed" tests (a.k.a. "SAE net torque and horsepower"). As you can see from the graph, the Stage 1 engine exceeds the stock 140 HP/164 CID engine in both torque (46%) and horsepower (27%)—no surprise given the different cams, carburetors, and exhaust. (The expected improvement due solely to displacement increase is 15%.)

I was concerned that graphing these two sets of test results might be unfair (not apples vs. apples). I discussed the test conditions with Jim Burkhard, Bob Helt, and Rad Davis and we decided that the conditions were similar enough to warrant a comparison. The differences of note are:

The Stage 1 engine has been very reliable. I put about 15,000 miles on it with no trouble (aside from a failed mechanical fuel pump [replaced by electric] and a failed ignition module) before I sold it. The next owner has not had any trouble with the engine as far as I know. This is a great setup for someone wanting significant improvement in usable torque for the street yet provided in a very mild-mannered package. The engine idles as if stock and gets around 27 MPG on the highway.

I sold this engine to make way for its successor, which I am calling Stage 2. The Stage 2 engine still has streetability as a primary design point. I wanted to experiment with new ways of getting even more performance than the Stage 1 engine while retaining good drivability. The Stage 2 engine features a roller valve train, as sold by American Pi, Inc., Weber 46 mm IDA-3C (triple-throat) carburetors, and heads with larger-diameter, angled-port exhaust tubes. John Barnes and I are in the middle of building the engine and we hope to have it completed this summer.

I will write a follow-up article about the Stage 2 engine and also about the car both engines have occupied / will occupy, my 1966 500 "sleeper" coupe. In the more distant future I want to replace the carburetors with a fuel injection system, so there should be Stage 3 and Stage 4 projects to document.